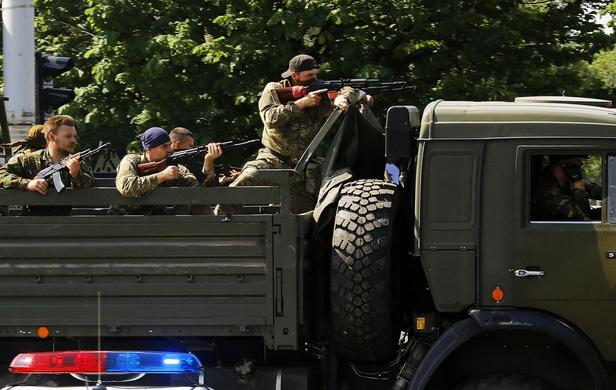 A military truck with armed pro-Russian militants drives through a police check-point towards the airport of the eastern Ukrainian city of Donetsk May 26, 2014.   REUTERS-Yannis Behrakis

May 27 (Reuters) – Ukrainian aircraft and paratroopers killed more than 50 pro-Russian rebels in an assault that raged into a second day on Tuesday after a newly elected president vowed to crush the revolt in the east once and for all.

The unprecedented offensive throws a challenge to Russian President Vladimir Putin, who has said he reserves the right to defend Russian speakers under threat, but whose past assertions that Kiev is led by an illegitimate “junta” were undermined by the landslide election victory of billionaire Petro Poroshenko.

Reuters journalists counted 20 bodies in combat fatigues in one room of a city morgue in Donetsk. Some of the bodies were missing limbs, a sign that the government had brought to bear heavy firepower against the rebels for the first time.

“From our side, there are more than 50 (dead),” the prime minister of the rebels’ self-styled Donetsk People’s Republic, Alexander Borodai, told Reuters at the hospital.

The government said it suffered no losses in the assault, which began with air strikes hours after Ukrainians overwhelmingly voted to elect 48-year-old confectionery magnate Poroshenko as their new president.

Putin demanded an immediate halt to the offensive. Moscow said a visit by Poroshenko was not under consideration, though it has said it is prepared to work with him.

Until now, Ukrainian forces have largely avoided direct assaults on the separatists, partly because they fear tens of thousands of Russian troops massed on the border could invade.

But Poroshenko and his government appear to have interpreted his victory as a clear mandate for decisive action. He won more than 54 percent of the vote in a field of 21 candidates, against 13 percent for his closest challenger.

Poroshenko and other leaders in Kiev may have calculated that the election, by bestowing legitimacy on the authorities, makes it harder for Putin to justify intervention.

Putin said in recent weeks he would withdraw troops from the border. A NATO military officer said most of them were still there, although some showed signs of packing to leave.