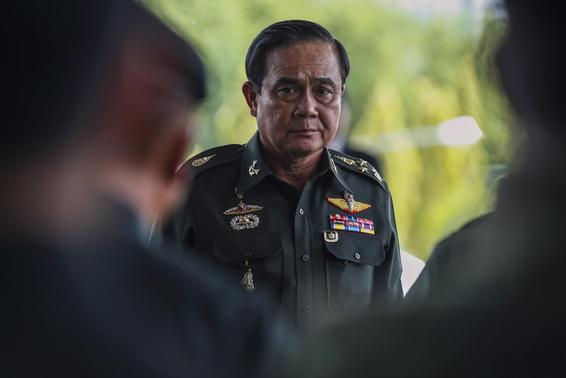 Thai Army chief General Prayuth Chan-ocha arrives before a meeting with high ranking officials at the Army Club, after the army declared martial law nationwide to restore order in Bangkok, May 20, 2014.     REUTERS/Athit Perawongmetha

(Reuters) – Thailand’s army declared martial law nationwide on Tuesday to restore order after six months of street protests that have left the country without a proper functioning government, but insisted the surprise intervention was not a military coup.

While troops patrolled parts of Bangkok and army spokesmen took to the airwaves, the caretaker government led by supporters of self-exiled former premier Thaksin Shinawatra said it was still running the country.

Army chief General Prayuth Chan-ocha said the military had stepped in to restore order and build investor confidence, and warned that troops would take action against anyone who used weapons and harmed civilians.

“We ask all sides to come and talk to find a way out for the country,” Prayuth told reporters after meeting directors of government agencies and other high-ranking officials.

Military officials said they were not interfering with the caretaker government, but ministers were not informed of the army’s plan before an announcement on television at 3 a.m. (2000 GMT on Monday) and Prayuth said martial law would be maintained until peace and order had been restored.

Twenty-eight people have been killed and 700 injured since the anti-government protests began in November last year.