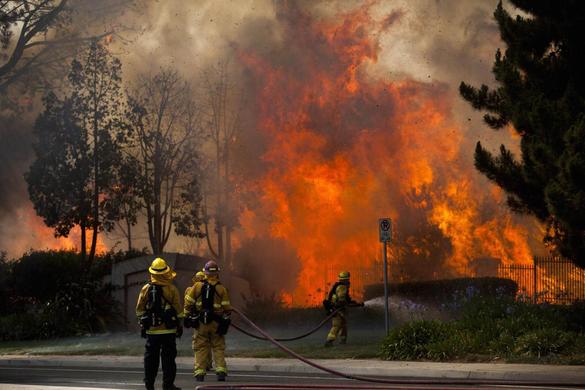 (Reuters) – More than 20 structures, including several homes, burned to the ground and thousands of people were ordered to evacuate on Wednesday, as a wind-lashed wildfire roared out of control in the heart of a Southern California coastal community.

The fire, which erupted shortly before 11 a.m. in Carlsbad, some 25 miles north of San Diego, quickly became the most pressing battle for crews fighting flames across the region amid soaring temperatures and hot Santa Ana winds.

“The safety and security of the community is our top priority, and all available resources are being deployed,” the city of Carlsbad said in a statement on its website that confirmed the destruction of at least two structures.

City officials told reporters at an afternoon news conference that more than 20 structures had been destroyed, at least three of them homes.

At least a dozen more homes and an apartment building were damaged and local TV images showed several in flames, with thick black smoke filling the sky and drifting over the Pacific Ocean.

The fires flared as California entered the height of wildfire season in the midst of one of the state’s worst droughts on record, setting the stage for what fire officials fear could be a particularly intense and dangerous year.

Some 15,000 homes and businesses in and around Carlsbad received the directive to evacuate ahead of the flames, according to the city, and emergency shelters were set up at area schools and community centers.

The Legoland amusement park was also evacuated, spokeswoman Julie Estrada said, mostly because of power outages in the area. San Diego Gas and Electric reported that an estimated 2,000 residents in and around Carlsbad were without electricity.

Southern California Edison said 13 employees were also evacuated from the largely shuttered San Onofre Nuclear Generating Station some 20 miles north of Carlsbad as a precaution, but were allowed to return later in the afternoon.

“It’s right in the middle of the city,” California Department of Forestry and Fire Protection spokesman Daniel Berlant said of the so-called Poinsettia Fire, which had blackened more than 100 acres by mid-afternoon.

He said Cal Fire was assisting the Carlsbad Fire Department in fighting the flames and had deployed water-dropping aircraft over the community.

Meanwhile a second fire, called the Tomahawk, broke out on the Camp Pendleton Marine Base north of San Diego and had charred more than 700 acres by mid-afternoon, prompting evacuation of military housing and a naval weapons station.

The new fires erupted just hours after crews aided by diminished overnight winds, made substantial headway against the so-called Bernardo Fire, which had forced thousands to flee their homes in and around San Diego for several hours in the afternoon and evening on Tuesday.

By daybreak on Wednesday, firefighters managed to establish containment lines around 25 percent of the Bernardo Fire’s perimeter, with all evacuation orders lifted and area schools reopened, according to fire officials.

Since erupting late on Tuesday morning, the Bernardo fire has scorched more than 1,500 acres, and officials said dangerous conditions persist.