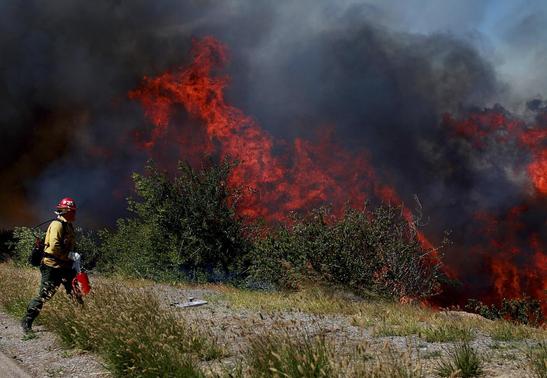 (Reuters) – More than 20,000 homes and other residences were being evacuated in and around San Diego on Tuesday as a fast-moving California wildfire driven by high winds blackened more than a square mile, fire and county officials said.

Hundreds of firefighters, assisted by water-dropping aircraft, fought to keep the flames from advancing into San Diego neighborhoods, said Lynne Tolmachoff, a spokeswoman for the California Department of Forestry and Fire Protection.

“The fire itself has been moving around in populated areas near some subdivisions so it’s definitely close to many residents,” she said. “They want to get those folks out of the area and into a safer area so our firefighters can get in there and do their job.”

The so-called Bernardo fire comes as California enters its peak fire season in the midst of one of its worst droughts in decades, setting the stage for what state officials worry could be a particularly intense and dangerous year.

3 thoughts on “More than 20,000 homes evacuated in path of San Diego wildfire”