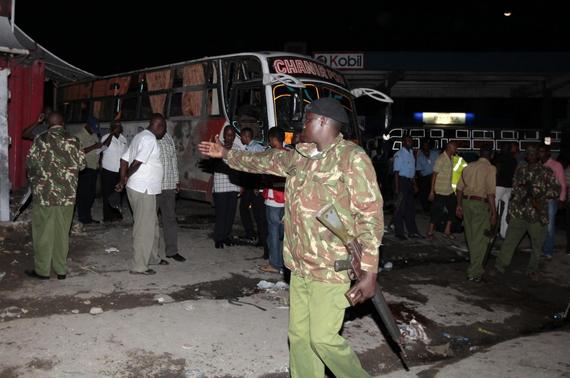 (Reuters) – At least three people were killed when attackers threw an explosive device at passengers at a bus station in Mombasa on Saturday, and a luxury hotel in the Kenyan coastal city was damaged in a separate blast, officials said.

There was no immediate claim of responsibility but Kenya has blamed similar attacks on the al Qaeda-linked Somali group al Shabaab, which killed at least 67 people at the Westgate shopping mall in Nairobi last September.

There have been a string of attacks since then.

“What happened is a grenade was thrown at passengers,” Mombasa county commissioner Nelson Marwa told journalists.

“The attackers were riding on a motor bike, and lobbed the grenade at the crowd of people at the bus terminus.”

More than 20 people were wounded.

Guards at the seaside Reef Hotel told Reuters they had prevented attackers from gaining entry, but the suspects threw a bag with an explosive device into the compound. A roof of one building was ripped off by the blast and part of its wall collapsed.

At the bus terminus, victims were sprawled in a pool of blood and the road was littered with shattered glass from a bus.

“I didn’t see who threw the object, but I heard a loud explosion before I fell to the ground. I then felt my legs go numb,” Halima Sidi, 26, who works at a local supermarket, told Reuters at a hospital as nurses bandaged her wounded legs.