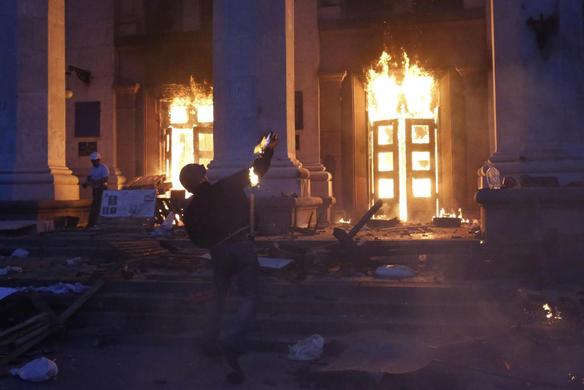 (Reuters) – At least 42 people were killed in a street battle between supporters and opponents of Russia in southern Ukraine that ended with dozens of pro-Russian protesters incinerated in a burning building, bringing the country closer to war.

Pro-Russian rebels in the east freed seven European military observers on Saturday after holding them hostage for eight days, while Kiev pressed on with its biggest military operation so far to reclaim rebel-held territory in the area.

The riot in the Black Sea port of Odessa, ending in a deadly blaze in a besieged trade union building, was by far the worst incident in Ukraine since a February uprising that ended with a pro-Russian president fleeing the country.

A couple of hundred pro-Russian protesters in the eastern city of Donetsk stormed the governor’s business premises and the state security headquarters, ransacking files and smashing windows. The attack reflected growing disorder in the area, targeting as it did a security building that had already been brought under rebel control.

“This is for yesterday!” said Tatiana Kamniva outside the governor’s office. “They’re monsters, worse than monsters.”

The Odessa clashes spread the violence from the eastern separatist heartland to an area far from the Russian frontier, raising the prospect of unrest sweeping more broadly across a country of around 45 million people the size of France.

The Kremlin, which has massed tens of thousands of soldiers on Ukraine’s eastern border and proclaims the right to invade to protect Russian speakers, said the government in Kiev and its Western backers were responsible for the deaths.