Egyptians react outside the courtroom in Egypt’s southern province of Minya on April 28, 2014. (photo credit:AFP/KHALED DESOUKI)

Get The Times of Israel’s Daily Edition by email
and never miss our top stories   Free Sign up!

The same court, presided over by judge Said Youssef Sabry, also reversed 492 death sentences out of 529 it passed in March, commuting most of those to life in prison.

The defendants sentenced on Monday were accused of involvement in the murder and attempted murder of policemen in the southern Minya province on August 14, the day police killed hundreds of ousted Islamist president Mohamed Morsi’s supporters in clashes in Cairo.

Several female relatives waiting outside the courtroom fainted on hearing news of the verdict. 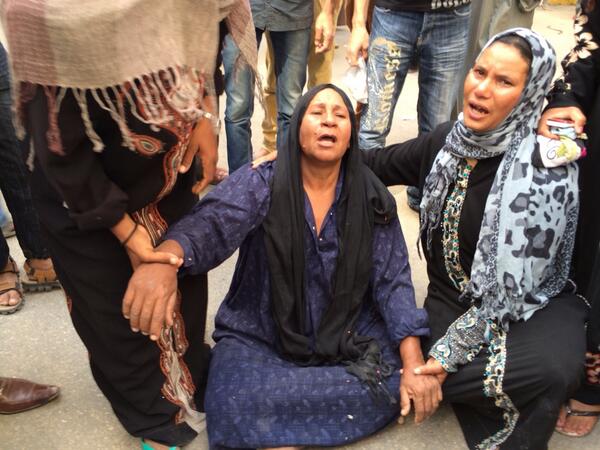 “Where is the justice?” others chanted.

Several said family members had been unjustly convicted or put on trial.

Attorney Ahmed Hefni told reporters outside the court in the southern city of Minya on Monday that the death sentences first have to be approved by Egypt’s mufti, the top Islamic official — a step that is usually considered a formality.

The verdict was the first against Badie, the spiritual head of Morsi’s Muslim Brotherhood, in the several trials he faces on various charges along with Morsi himself and other Brotherhood leaders.

After the mufti’s decision, the same court will hold another session on June 21 to issue the final verdicts.

Monday’s stunning decision sparked an outcry among families of the defendants, with women fainting and relatives wailing and crying out “Why? This is unfair!”

“My three sons are inside,” said a woman outside the court who only gave her first name, Samiya, as she screamed in grief. “I have no one but God.”

“This is against the spirit of the law. The verdicts will be easily appealed,” Kamal told reporters.

Monday’s ruling comes amid a brutal crackdown on Morsi supporters and the Brotherhood since the military overthrew him last July amid massive protests calling for his resignation.

The court has come under the spotlight after the same judge in March sentenced the 529 defendants to death in just two sessions. That verdict outraged the United Nations and human rights groups.

The second batch of nearly 700, including Badie, faced charges of the murder and attempted murder of several policemen during rioting by Morsi supporters in Minya on August 14.

The charges are similar to those faced by the other 529.

Relatives of the defendants waited outside the heavily secured court on Monday to awaiting the latest verdicts. Several said family members had been unjustly convicted or placed on trial.

“My son does not even pray, he does not even know where the mosque is,” said one woman, whose son was among the 529 sentenced to death in March.

The rioting last August 14 erupted as news spread that police had killed hundreds of Morsi supporters while dispersing two protest camps in Cairo.

Monday’s session was the second for the around 700 defendants, after an opening hearing in March which Sabry adjourned to announce the verdict.

Of the nearly 700 accused, some 50 are in custody while the others are either on bail or on the run.

The court’s verdicts can be appealed at the Court of Cassation, which would probably order a new trial or commute the sentences for the 529 already given the death penalty, legal expert Gamal Eid said.