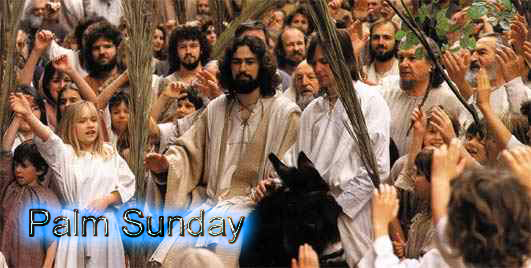 Palm Sunday.  The beginning of the week in which Jesus Christ would be sacrificed on the cross, buried in a tomb, and rise from the dead after three days.  The day that our Lord and Savior would ride into Jerusalem to celebrate Passover, while riding on the back of a donkey, the King of kings, the Lord of lords.  Coming in peace, love, and hope.  Humbling Himself before the nation of Israel.

9 “Rejoice greatly, O daughter of Zion!
Shout, O daughter of Jerusalem!
Behold, your King is coming to you;
He is just and having salvation,
Lowly and riding on a donkey,
A colt, the foal of a donkey.”

21 ‘Now when they drew near Jerusalem, and came to Bethphage, at the Mount of Olives, then Jesus sent two disciples, 2 saying to them, “Go into the village opposite you, and immediately you will find a donkey tied, and a colt with her. Loose them and bring them to Me. 3 And if anyone says anything to you, you shall say, ‘The Lord has need of them,’ and immediately he will send them.”

4 All this was done that it might be fulfilled which was spoken by the prophet, saying:

5 “Tell the daughter of Zion,
‘Behold, your King is coming to you,
Lowly, and sitting on a donkey,
A colt, the foal of a donkey.’”

“Hosanna to the Son of David!
‘Blessed is He who comes in the name of the Lord!’
Hosanna in the highest!”

10 And when He had come into Jerusalem, all the city was moved, saying, “Who is this?”

11 So the multitudes said, “This is Jesus, the prophet from Nazareth of Galilee.”’

Many did not believe that Jesus was the Messiah spoken of in the Old Testament.  He did not meet the expectations of whom they believed their King should be.  He did not come with great force and to conquer their enemies.  But instead came in quiet and peacefully.  Yet, many today still do not believe that Jesus is Lord.  As He once again does not meet the expectations of whom they believe God should be.

Who do you believe Jesus is?  Just a man, merely a prophet, or God?

Whatever you believe or don’t believe, the truth is the truth.  You cannot change it.

Let us take this time to think about Jesus and what He has done for us.  What He has taken upon Himself in order to save us and give us eternal life.  The pain, suffering, and torment in which the innocent, blameless, and perfect Son of God endured for us.

May peace be with you, the love of God fill you, and the light of God shine through you!  God Bless!

21 thoughts on “Palm Sunday, a day to reflect”