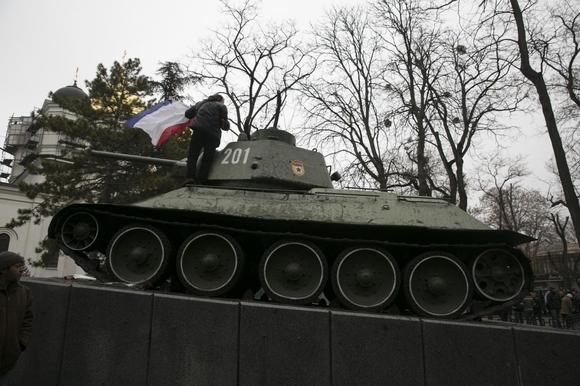 An ethnic Russian Ukrainian man holds the Crimea flag on top of an old Soviet tank during rallies near the Crimean parliament building in Simferopol February 26, 2014.
Credit: Reuters/Baz Ratner

(Reuters) – The United States warned Russia on Wednesday it would be a “grave mistake” to intervene militarily in Ukraine and said it was considering $1 billion in U.S. loan guarantees and additional funding to help Kiev.

“For a country that has spoken out so frequently … against foreign intervention in Libya, in Syria, and elsewhere, it would be important for them to heed those warnings as they think about options in the sovereign nation of Ukraine,” Kerry told a small group of reporters at the U.S. State Department.

“I don’t think there should be any doubt whatsoever that any kind of military intervention that would violate the sovereign territorial integrity of Ukraine would be a huge – a grave mistake,” he added.

“If there were any kind of decision like that, I do not think that’s a cheap decision. I think it’s a very expensive decision.”

Kerry said Washington was considering $1 billion in U.S. loan guarantees for Ukraine, as well as possible budget support for the former Soviet republic, but said no decisions had been made. He said Europe was also mulling roughly $1.5 billion in assistance to Ukraine.

“We are formulating initially a $1 billion loan guarantee with some other pieces, but we are also looking at the possibility of additional assistance,” Kerry said. The Obama administration was discussing the matter internally, he said.

5 thoughts on “Russian military action in Ukraine would be ‘grave mistake’: U.S.”