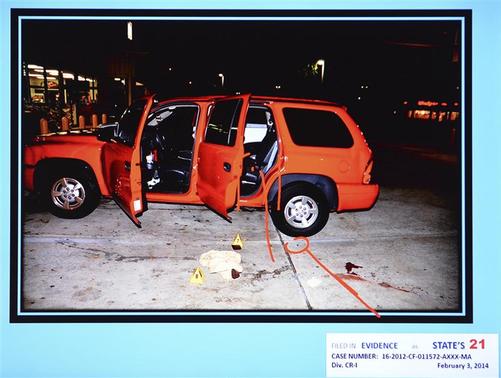 A state evidence photo presented February 7, 2014 during the murder trial of Michael Dunn in Jacksonville, Florida, shows the red Durango SUV where Jordan Davis was seated when he was shot at a gas station during an altercation.
Credit: Reuters/Bob Mack/The Florida Times-Union/Pool

(Reuters) – A black teenager shot dead by a middle-aged white man in Florida after an argument over loud rap music, was unarmed and never threatened his assailant, a court heard on Friday.

In testimony that centered on events leading up to the November 23, 2012, shooting, three friends of the 17-year-old victim, Jordan Davis, testified they were caught by surprise when Michael Dunn, a 47-year-old software engineer, opened fire on their SUV at a Jacksonville gas station in north Florida.

Moments before the shooting, one of the teens Tevin Thompson, 18, said he heard Dunn ask: “Are you talking to me?” He then said he saw Dunn pull out a 9 mm pistol, turn toward Davis and fire.