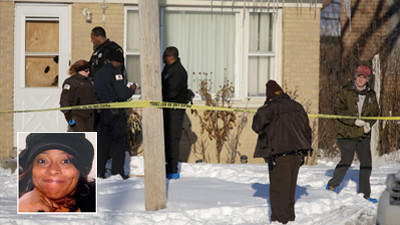 4 dead in Robbins: ‘What could bring someone to such a dark place?’

(SOURCE)  Police were at a loss to explain why a man shot and killed his wife and his 17-year-old son, then shot his 15-year-old daughter in the back as she ran from their home in Robbins with two other children.

As a 14-year-old boy and his 5-year-old nephew kept running, Michael Worsham dragged the girl back into the home and fired at witnesses who had stopped their car, according to Robbins Police Chief Mitchell Davis. The children and the witnesses were not hit.

Inside the home, police found Worsham, his wife of 12 years, Michelle Ollie, 42, and their two children, Steven, 17 and Trisdion, 15.  Ollie and the teens were shot to death, and it appeared Worsham may have died from a heart attack, police said.

“I cannot imagine what could bring someone to such a dark place where they believe they need to take the lives of his whole family,” Davis told a news conference this morning.

He praised the quick actions of the 14-year-old, who alerted his sister to the shooting while struggling with Worsham, then grabbed his nephew and ran. “That 14-year-old is a hero,” Davis said.

1 thought on “Father in Chicago suburbs shoots and kills wife, then his son and daughter”