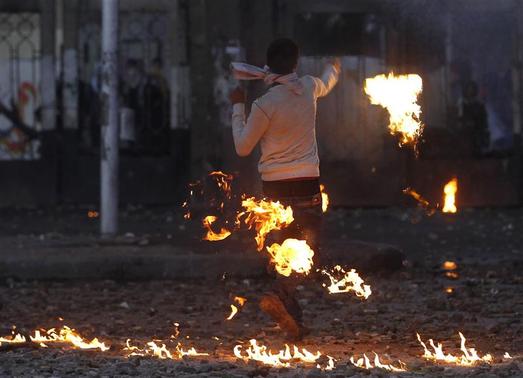 A supporter of the army and police throws back a Molotov cocktail at students of Al-Azhar University who are supporters of the Muslim Brotherhood and ousted Egyptian President Mohamed Mursi, during clashes outside the Al-Azhar University campus in Cairo’s Nasr City district December 27, 2013.    Credit: Reuters/Amr Abdallah Dalsh

(Reuters) – One student was killed on Saturday and scores were arrested when supporters of the Muslim Brotherhood clashed with Egyptian police at the Cairo campus of Al-Azhar University, state media reported.

Shaimaa Mounir, a student activist, told Reuters that the dead student was Khaled El-Haddad, a supporter of the Brotherhood that was designated this week as a terrorist organization by the state.

Protesters threw rocks at police and set tires on fire to counter the teargas. Al-Ahram quoted a health ministry official as saying that one student had been killed and five injured.