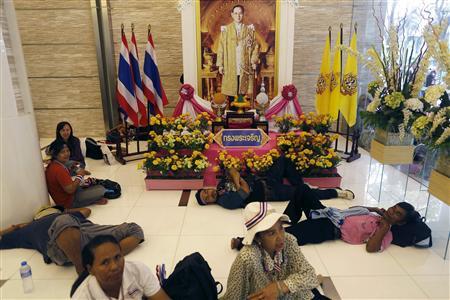 (Reuters) – Anti-government protesters forced their way inside Thailand’s Finance Ministry and burst through the gates of the Foreign Ministry compound on Monday, in an escalating bid to overthrow Prime Minister Yingluck Shinawatra.

The seizing of government buildings by protesters, led by the opposition Democrat Party, plunges Thailand into its deepest political uncertainty since it was convulsed three years ago by the bloodiest political unrest in a generation. 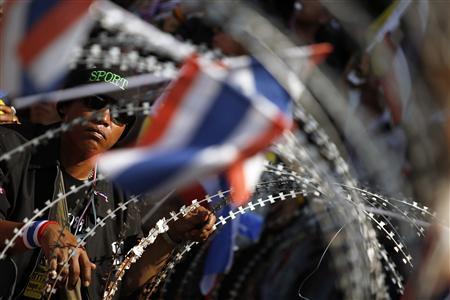 An anti-government protester is seen through razor wire at the police barricades near a government building chosen as a protest site, in Bangkok November 25, 2013. REUTERS-Damir Sagolj

The protesters accuse Yingluck of being a puppet for her brother, former Prime Minister Thaksin Shinawatra, who was ousted in a 2006 military coup and convicted two years later of graft – charges he denies. Thaksin lives in self-imposed exile but exerts enormous influence over his sister’s government. 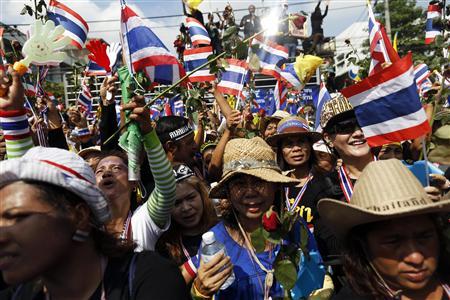 Anti-government protesters gather at police barricades near a government building which they chose as a protest site, in Bangkok November 25, 2013. REUTERS-Damir Sagolj

About 1,000 protesters swarmed the Finance Ministry, filling its cavernous marble-floored halls and occupying six other buildings. Many gathered in first-floor meeting rooms, blowing whistles and laying out plastic mats for resting and eating. Occupying its grounds is symbolic, they said, of targeting the money at the heart of the “Thaksin regime”.

Staff left the building and moved to a parking lot.

“Our only objective is to rid the country of the Thaksin regime,” added Suthep, a former deputy prime minister under the previous Democrat-led government.

Yingluck, 46, was defiant, saying she would not step down.