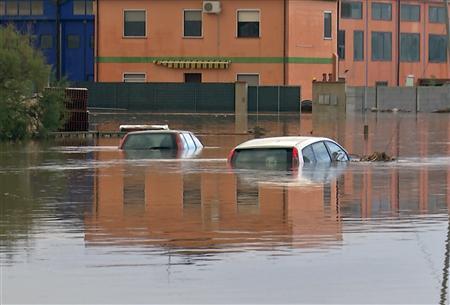 (Reuters) – At least 17 people have been killed in flooding and hundreds made homeless after a cyclone swept over the Mediterranean island of Sardinia, Italian authorities said on Tuesday.

The government declared a state of emergency after Cyclone Cleopatra dropped 450mm of rain in an hour and a half overnight, causing rivers to burst their banks, sweeping away cars and flooding homes across the island.

“This is a national tragedy,” Prime Minister Enrico Letta said.

The declaration of a state of emergency will allow resources to be freed up more quickly to reach devastated areas, with swathes of the island under muddy flood waters that covered cars and swamped houses.

The government also set aside 20 million euros ($27 million) in immediate emergency funds to help the rescue and clean-up work.

The mayor of Olbia, the northeastern Sardinian town among the worst-affected areas, said the sudden flooding had burst “like a bomb” with the same amount of water falling in 90 minutes as falls in the city of Milan in six months.

Mayor Gianni Giovannelli said houses across the area had been left half-submerged by the floods and rescuers were still searching for possible victims.

“We’ve just found a dead child we had been searching all night for,” he told SkyTG24 television.

Beyond the immediate casualties, the disaster raised questions about how well prepared Italy‘s cash-strapped local governments, under increasing financial pressure after more than two years or recession, are to deal with sudden emergencies.

“We’re facing an exceptional event here which has put our system of territorial planning and management into crisis,” said Antonello Frau, deputy head of the island’s geological service.

“We really have to assess how we manage these situations, which are becoming more frequent.”