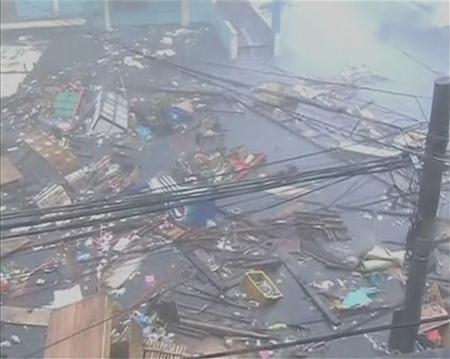 Haiyan, a category-5 storm, lashed the islands of Leyte and Samar with 5-6 meter (15-19 ft) waves as it headed toward densely populated central and southern Philippines, including the resort island of Boracay and other holiday destinations.

Authorities warned more than 12 million people were at risk, including residents of the Philippines’ second-largest city Cebu, home to around 2.5 million people, and areas still reeling from a deadly 2011 storm and a 7.1-magnitude quake last month.

“The super typhoon likely made landfall with winds near 195 mph. This makes Haiyan the strongest tropical cyclone (typhoon) on record to make landfall,” said Jeff Masters, a hurricane expert and director of meteorology at U.S.-based Weather Underground.

Typhoons and cyclones of that magnitude can blow apart storm-proof shelters due to the huge pressure they create, which can suck walls out and blow roofs off buildings, say engineers.

About a million people had taken shelter in more than 20 provinces, after Philippine President Benigno Aquino appealed to people in Haiyan’s path to evacuate from danger spots, such as river banks, coastal villages and mountain slopes.

“Please do not underestimate this typhoon. It is very powerful. We can feel each gust,” Roger Mercado, governor of Southern Leyte province, adjacent to Leyte, told DZBB radio. “We lost power and all roads are impassable because of fallen trees. We just have to pray.”

“Our school is now packed with evacuees,” an elementary school teacher in Southern Leyte who only gave her name as Feliza told a radio station. Leyte and Southern Leyte are about 630 km (390 miles) southeast of the capital Manila.