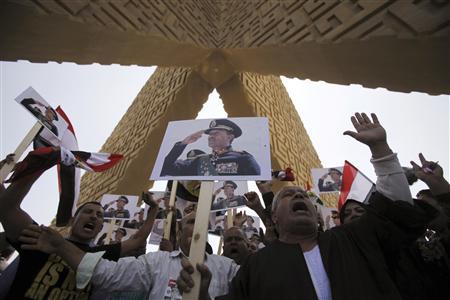 Police fired tear gas to try and keep them away from the square, where people gathered for celebrations to commemorate an attack on Israeli forces during the 1973 war when Egyptian troops crossed the Suez Canal and brought down fortifications.

Riot police also beat protesters who headed towards Tahrir, said a Reuters reporter at the scene.

The Muslim Brotherhood, Egypt’s oldest and most influential Islamist group, has demonstrated repeatedly against the army’s overthrow of Mursi in July. 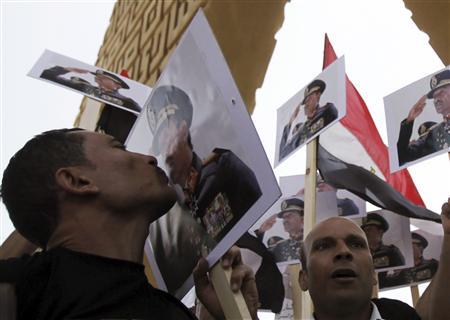 A man kisses a poster of late Egyptian President Anwar Sadat as supporters of army shout slogans against ousted Islamist President Mohamed Mursi and members of the Muslim Brotherhood at Sadat’s tomb, during the 40th anniversary of Egypt’s attack on Israeli forces during the 1973 war, at Cairo’s Nasr City district, October 6, 2013. REUTERS-Amr Abdallah Dalsh

Sisi has promised a political roadmap would bring free and fair elections and stability to Egypt, the most populous Arab state. The Muslim Brotherhood has rejected the political transition, saying the army-backed government installed by Sisi is illegitimate.

Islam Tawfik, a Brotherhood member and journalist, said supporters of the group, many of whom have been jailed since the army’s overthrow of Mursi, were determined to reach Tahrir.

“Those of us taking to the streets today want to celebrate the army that used to point its weapons towards the enemy and not towards its people,” he told Reuters.

“We want to enter Tahrir and Rabaa (site of an earlier Muslim Brotherhood protest sit-in) because they are not reserved for those supportive of the coup,” he said.

Authorities have cracked down hard on the Brotherhood, which won every election after Mubarak’s fall but became unpopular during Mursi’s rule, with many Egyptians accusing him of trying to acquire sweeping powers and mismanaging the economy. He denies the allegations.

The Brotherhood accuses the army of staging a coup and sabotaging democracy by ousting Mursi, the first freely-elected president in Egypt, a key U.S. ally which has a peace treaty with Israel and controls the Suez Canal, a vital global trade route.

The military says it was acting in line with the will of the people after mass protests against Mursi’s rule.

On August 14, Egypt’s military-backed authorities smashed two pro-Mursi sit-ins in Cairo, with hundreds of deaths, and then declared a state of emergency and imposed a curfew. Many of the Brotherhood’s leaders have been arrested since.

Egyptian authorities have tightened security around the country since clashes killed at least four people on Friday, when Mursi’s supporters mounted their boldest demonstrations since troops crushed their protest camps.

1 thought on “Brotherhood supporters march on central Cairo; one killed”