And you thought you’ve seen everything!  The 2013 “Burning Man” ceremony opened this past Sunday, 8 September, 2013.  It is being held in the Black Rock Desert in northern Nevada.  This is where the world is heading.  Most of these people are more than likely unaware of just who they are serving.  Aliens, spaceships, cults, Satan.  This is Satan worship in mass.  Worshiping idols and false gods.  The photos depict just some of what is happening at this ceremony.  However, there are many more photos which I cannot show due to nudity and are graphic in nature.  These events are evil, satanic and full of alcohol, drugs, nudity and sex.

We must pray for our country, for God to show us mercy and grace.  Amen

Citizens of Black Rock City have been streaming into event after Sunday evening’s opening of the gates.

The Man burns during the Burning Man 2013 arts and music festival in the Black Rock Desert of Nevada, on August 31, 2013. The federal government issued a permit for 68,000 people from all over the world to gather at the sold out festival, which is celebrating its 27th year, to spend a week in the remote desert cut off from much of the outside world to experience art, music and the unique community that develops. (Reuters/Jim Urquhart)

Threats of severe thunderstorms Sunday afternoon ended up not coming to fruition, with a few intermittent sprinkles in the three o’clock hour wetting the playa down just a bit, but not enough to close the gates, thankfully.

A steady stream of cars hit the dried out lake bed of the Black Rock Desert after the 6 p.m. opening of the gates Sunday night. By 4:20 a.m. Monday morning, the line to get in was still at least a three-hour wait, according to reports on BMIR, the city’s official radio station.

The weather the last few days has been mild, thanks largely to the smoke from the Yosemite fire keeping the sun’s heat at bay behind a large blanket of orange haze. At sunrise Monday morning, the sun couldn’t be seen until it cleared the haze on the horizon and faintly revealed itself.

An aerial view of the Burning Man 2013 arts and music festival is seen in the Black Rock Desert of Nevada, August 29, 2013. The federal government issued a permit for 68,000 people from all over the world to gather at the sold out festival, which is celebrating its 27th year, to spend a week in the remote desert cut off from much of the outside world to experience art, music and the unique community that develops. REUTERS/Jim Urquhart

The Man Base is still under construction, and is expected to be completed Monday night, one night behind schedule. A severe thunderstorm and subsequent mud pit delayed crews for three days, on a project which had no days of wiggle-room. The fact that they made up two days of work and are only one day behind is impressive.

Monday afternoon Joe spoke with Larry Harvey, Burning Man creator and figurehead, and explained the situation with Man Base and confirmed that crews would be finished by Monday night.

This year, the Man rotates at night, while standing atop a giant flying saucer. In the meeting, Harvey said that he wanted one rotation to last 40 seconds, instead of the 55 that had been tested. 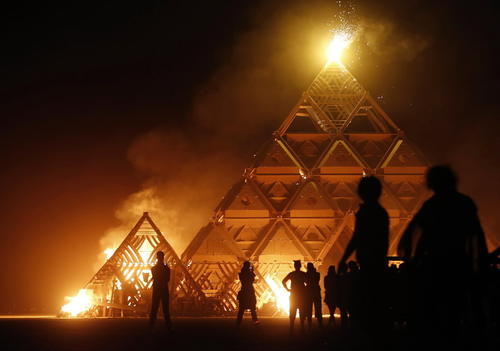 Reports of theme camps getting busted for serving undercover minors working with the police were circulating before noon on Monday, as police presence and aggressive ticketing continue to be a topic of conversation for citizens of Black Rock City.

As the city fills, artists are finishing up their projects in the open playa and parties are happening all over Black Rock’s inner city.

No reports yet on population counts.

3 thoughts on “Idol / Alien / Satan Worship? May God Have Mercy On Us!”