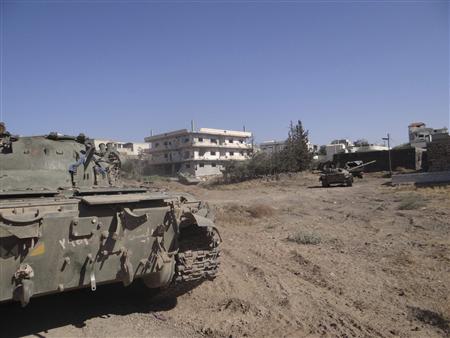 A view shows tanks and military vehicles that belonged to forces loyal to Syria’s President Bashar al-Assad after the Free Syrian Army fighters said they fought and defeated government troops in the town of Basr al-Harir in the southern province of Deraa in this August 27, 2013 picture provided by the Shaam News Network. Picture taken August 27, 2013.
REUTERS/Ibrahim al-Hariri/Shaam News Network/Handout via Reuters

U.S. Secretary of State John Kerry said tests had shown sarin nerve gas was fired on rebel-held areas near Damascus, and expressed confidence that lawmakers would do “what is right” in responding to last month’s attack.

Washington says more than 1,400 people, many of them children, were killed in the attack.

Obama’s decision on Saturday to seek congressional authorization for punitive military action against Syria is likely to delay any strike for at least nine days.

However, the United Nations said his announcement could be seen as part of an effort to forge a global consensus on responding to the use of chemical arms anywhere.

With Obama drawing back from the brink, President Bashar al-Assad’s government reacted defiantly to the threat of Western retaliation for the August 21 chemical attack, which it says was staged by the rebels.

Assad said Syria was capable of confronting any external strike, but left the most withering comments to his official media and a junior minister.

“Obama announced yesterday, directly or through implication, the beginning of the historic American retreat,” Syria’s official al-Thawra newspaper said in a front-page editorial.

Before Obama put on the brakes, the path had been cleared for a U.S. assault. Navy ships were in place and awaiting orders to launch missiles, and U.N. inspectors had left Syria after gathering evidence on the use of chemical weapons.

Kerry urged skeptical U.S. lawmakers to back a strike on Assad’s forces. “This is squarely now in the hands of Congress,” he told CNN, saying he had confidence “they will do what is right because they understand the stakes.”

Last month’s attack was the deadliest incident of the Syrian civil war and the world’s worst use of chemical arms since Iraq’s Saddam Hussein gassed thousands of Kurds in 1988.

However, opinion polls show strong opposition to a punitive strike among Americans weary of wars in Iraq and Afghanistan.

U.S. lawmakers for the most part welcomed Obama’s decision but have not cut short their summer recess, which ends September 9. Many Democrats and Republicans are uneasy about intervening in a distant civil war in which 100,000 people have been killed over the past 2-1/2 years.

Lawmakers were to be briefed by Obama’s national security team on the case for military action. Kerry said he had more evidence backing accusations against the Syrian government.

“I can share with you today that blood and hair samples that have come to us through an appropriate chain of custody, from east Damascus, from first responders, it has tested positive for signatures of sarin,” Kerry told CNN’s “State of the Union.”

The U.N. weapons inspectors collected their own samples and diplomats say Secretary-General Ban Ki-moon has told the five permanent Security Council members – Britain, China, France, Russia and the United States – that it would take up to two weeks before the final report is ready.

Ban views Obama’s decision “as one aspect of an effort to achieve a broad-based international consensus on measures in response to any use of chemical weapons,” U.N. spokesman Martin Nesirky said.

In Damascus, Syrians reacted with a mixture of relief, disappointment and scorn to Obama’s decision. “I have to admit this morning was the first time I felt I could sleep in,” said Nawal, who works as a housekeeper in the Syrian capital.

Bread had returned to the bakeries and members of the state security forces appeared relaxed, drinking tea and chatting at their posts outside government buildings.

The United States had originally been expected to lead a strike relatively quickly, backed up by its NATO allies Britain and France. However, British lawmakers voted last Thursday against any involvement and France said on Sunday it would await the U.S. Congress’s decision.

French President Francois Hollande, whose country ruled Syria for more than two decades until the 1940s, has come under increasing pressure to put the intervention to parliament.

A BVA poll on Saturday showed most French people do not approve of military action against Syria and most do not trust Hollande to conduct such an operation.

Jean-Marc Ayrault, his prime minister, was to meet the heads of both houses of parliament and the conservative opposition on Monday before lawmakers debate Syria on Wednesday.

Saudi Foreign Minister Saud al-Faisal said Riyadh would back a U.S. strike on Syria if the Syrian people did. He was speaking at a meeting in Cairo of the Arab League, which has blamed Syria for the chemical attack but has so far stopped short of explicitly endorsing Western military strikes.

Syria and its main ally, Russia, say rebels carried out the gas attack as a ploy to draw in foreign military intervention. Moscow has repeatedly used its U.N. Security Council veto to block action against Syria and says any attack would be illegal and only inflame the civil war there.

Obama’s credibility had already been called into question for not punishing Assad over earlier alleged gas attacks, and he is under pressure to act now that he believes Damascus has crossed what he once described as a “red line”.

Failure to punish Assad, some analysts say, could mean his ally Iran would feel free to press on with a nuclear program the West believes is aimed at developing an atomic bomb but which Tehran says has only civilian goals. That might encourage Israel to take matters into its own hands, analysts say.

“If Obama is hesitating on the matter of Syria, then clearly on the question of attacking Iran – a move that is expected to be far more complicated – Obama will hesitate much more, and thus the chances Israel will have to act alone have increased,” Israeli Army Radio quoted an unnamed government official as saying.

Pope Francis called for a negotiated solution to the conflict in Syria and announced he would lead a worldwide day of prayer for peace in the country on Saturday.