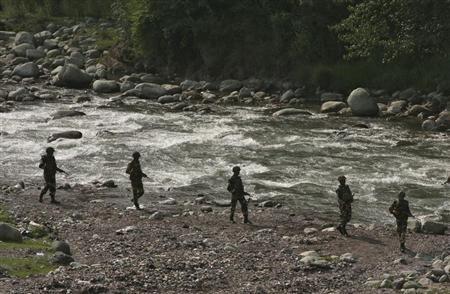 On Monday, a Pakistani army official said a civilian was killed as a result of “unprovoked Indian shelling” in the Battal, Chirikot and Satwal sectors.

A spokesman for the Indian Defence Ministry offered a different version of events on the Kashmir frontier. He said Indian posts came under heavy mortar and automatic weapon fire overnight in the same area and that India “responded effectively.” He said no damage or injuries were reported on the Indian side.

The disputed Himalayan region was split between India and Pakistan in 1948 but they both claim it in its entirety.

They have fought two of their three wars over Kashmir and India accuses Pakistan of supporting separatist rebels fighting its rule in its part of Kashmir since 1989.

The two armies have been exchanging fire on the front line since Tuesday, straining the ceasefire that has largely held for nearly a decade.

Within India, as the mood hardens, Pakistan’s national airline, Pakistan International Airlines (PIA), said it had tightened security at its office in New Delhi after two men sprayed black paint on the walls and dropped a note of warning at the door.

“Pakistan must immediately stop attacking Indian soldiers and violating the ceasefire agreement, and until they do that, they will not be allowed to operate any office on India’s sacred soil,” said the statement, signed by the Delhi unit of the hardline Hindu nationalist Shiv Sena.

The Indian army patrolled an area close to Poonch on India’s side of the fence on Monday after three people died in riots between Hindus and Muslims over the weekend. Opposition parties linked the rioting to the renewed border tensions, because some of the protesters involved had brandished a Pakistani flag.

A curfew was in place in eight of 10 districts of Jammu to contain the unrest. Authorities also blocked mobile data transmission services in the region.

“It is not a law and order situation, this is an issue of India’s sovereignty,” said Arun Jaitley, a senior leader of the Bharatiya Janata Party.

Jaitley was prevented from visiting the riot-hit area of Kishtwar on Sunday, and Kashmir’s chief minister, Omar Abdullah, accused him of trying to inflame tensions for political gain ahead of elections next year. Sporadic protests and clashes with police continued on Monday.

On Pakistan’s side of the border, hundreds of people took to the street in Muzaffarabad, the capital of Pakistan-controlled Kashmir, accusing India of stepping up attacks.

“Down with India! Long live the Kashmir freedom movement!” they chanted as the crowd marched towards the Muzaffarabad office of the U.N. Military Observer Group which monitors the ceasefire.

“India does not want peace to prevail in this region,” said migrant Uzair Ahmed Ghizali. “This becomes clear from atrocities inside the held territory and provocative actions along the Line of Control.”

Media have reported Pakistan might redeploy some of its troops from the Afghan border, where the army is fighting a separate Taliban-linked insurgency, to the eastern frontier, but an army official said the option was not on the table.

India and Pakistan have been trying to restart stalled peace talks, possibly as early as this month, as well as a possible meeting between Indian Prime Minister Manmohan Singh and his Pakistani counterpart, Nawaz Sharif, in New York in September.

India has deployed tens of thousands of soldiers in Kashmir to put down an armed revolt that began in 1989. In recent years, violence has ebbed, but there has been little movement on a political settlement.