Smoke billows over Gaza after a series of IAF airstrikes that marked the onset of Operation Pillar of Defense, Wednesday, November 14, 2012 (photo credit: Edi Israel/Flash90)

Two weapons facilities and a rocket launching site in Gaza were targeted by the Israeli Air Force in the early hours of Monday morning, the IDF Spokesperson’s office said, after at least six rockets were launched from the Strip into southern Israel late Sunday night and early Monday.

Red alert sirens sounded across several regions of southern Israel, in the worst such attacks since last November.

There were no immediate reports of injuries or damage. Four of the rockets exploded in open areas near Netivot and the Bnei Shimon region, west of Beersheba.

The Iron Dome system intercepted two of the projectiles, believed to be grad rockets. Sirens were also heard near the Beduin town of Rahat in the Negev and in the Ashkelon Regional Council.

The IDF assessment was that the rockets were launched from the northern Gaza Strip, according to Israel Radio.

The IDF was checking the possibility that the rockets were launched by radical Salafi fighters, who do not recognize Hamas rule, or in an act of defiance by the terrorist group Islamic Jihad, which earlier Sunday announced that it was suspending ties with the ruling Hamas government.

The rift came after a confrontation Saturday between Hamas policemen and a senior Islamic Jihad member whom they were trying to take him into custody for interrogation. The suspect was killed in the standoff, Israel Radio reported, with Hamas alleging that he committed suicide.

“Islamic Jihad today suspended its contacts with Hamas after police opened fire yesterday on one of the commanders of the Al-Quds Brigades, Raed Jundiya, 38, inflicting serious injuries from which he died this morning,” AFP quoted a leader of the extremist group as saying.

“The murder of Raed Jundiya represents a major service to the Zionist enemy, provided completely free of charge, whether deliberately or not, because the martyr was, as everybody knows, on the top of the Zionists’ hit-list as he headed the Brigades’ rocket unit,” he said.

The extremist group boasts some 8,000 members of its military wing, making it the second largest armed group in the Gaza Strip. Islamic Jihad has largely respected the Egyptian-brokered agreement that brought to an end Operation Pillar of Defense last November.

Sunday’s incident represents the first time rockets have hit the Netivot and Bnei Shimon areas since the end of the military operation.

Last week, the Times of Israel reported that Hamas had deployed a 600-man force in Gaza to prevent rocket fire at Israel. 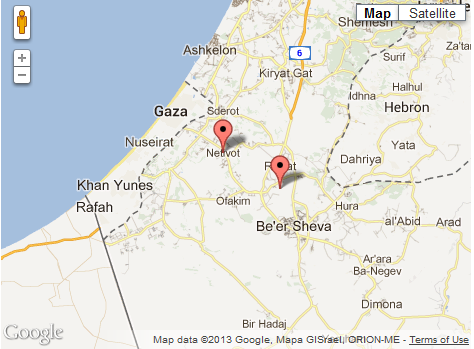