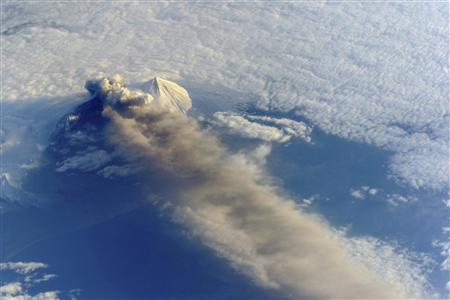 Reblogged from: Help With Survival HQ

(Reuters) – Two volcanoes are erupting on the Alaska Peninsula in the southwestern part of the state’s mainland but the sputtering emissions of ash and lava at the different sites are unrelated, scientists said.

Pavlof Volcano, an 8,261-foot (2,518-metre) peak located about 590 miles southwest of Anchorage, has been erupting sporadically since May 13.

On Thursday, it was joined by 8,225-foot (2,507-metre) Veniaminof Volcano when that peak, about 100 miles to the northwest of Pavlof, began to erupt, according to a geologist at the Alaska Volcano Observatory.

Veniaminof, which is 485 miles southwest of Anchorage, has been spurting steam, ash and lava on a sporadic basis, according to the observatory. An ash plume was spotted at 12,000 feet on Thursday night, geologist Game McGimsey said on Saturday.

The eruptions of the two volcanoes are coincidental, said McGimsey.

Pavlof’s eruptions, which at one point sent ash as high as 22,000 feet, forced cancellation of some regional flights late last month, but those flights have since resumed, according to Anchorage-based carrier PenAir.

There are no current reports of air-traffic interference from the eruptions of the two volcanoes, McGimsey said.

The observatory warns that sudden bursts of ash, including clouds at 20,000 feet or higher, could occur with little warning, and observatory scientists have put aviators on notice.

Both volcanoes lie below a route frequently used by jetliners flying between North America and Asia, but those planes generally fly at elevations of 30,000 feet and likely would be unaffected by ash at lower elevations, observatory scientists said.

At least one community, Sand Point, received a dusting of ash from Pavlof last month.