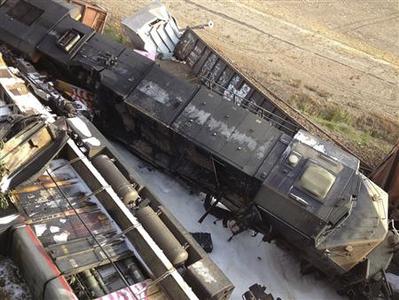 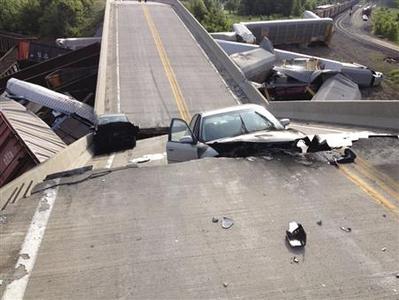 Cars damaged when an overpass collapsed after two freight trains that collided at a rail intersection in Missouri May 25, 2013, are pictured in this photo courtesy of KFVS12. Mike Mohundro of KFVS12-Handout via Reuters

“One train T-boned the other one and caused it to derail, and the derailed train hit a pillar which caused the overpass to collapse,” Sheriff’s dispatcher Clay Slipis said of the pre-dawn crash near Chaffee, about 15 miles southwest of Cape Girardeau, in southeastern Missouri.

The collision of the BNSF Railway Co and Union Pacific trains also sparked a fire when diesel fuel leaked from one of the train engines, Slipis said. 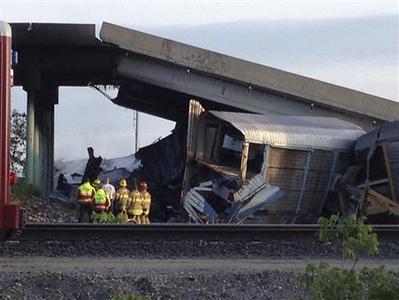 Emergency personnel looking at an overpass that collapsed after two freight trains collided at a rail intersection in Missouri May 25, 2013, are pictured in this photo courtesy of KFVS12. Mike Mohundro of KFVS12-Handout via Reuters

The crash came just over a week after a commuter train derailed in Connecticut, striking another train and injuring more than 70 people during the evening rush hour.

On Thursday, a truck crash triggered the collapse of a bridge in Washington state, sending two cars plunging into the frigid Skagit River and raising concerns about the country’s aging infrastructure. Three people were rescued.

In Missouri, Wayne Woods told a regional CBS affiliate that he rushed to the scene as soon as he heard the crash to try to halt traffic as he called in the emergency.

“We heard the crash and we stepped outside and my son said the overpass was down. Then we heard a car’s tires squealing like it was coming to a stop and then a crash and a horn continuously blowing,” he told KFVS television.

“I got over there, the train was on its side. They got the guys out and lifted them down off the train and got them off the overpass. One was kind of bloody and the other one looked like he was pretty shook up,” he said.

There was no immediate word on the cause of the crash, and the National Transportation Safety Board said it dispatched a team to investigate the train crash.

Television footage and news photos of the scene showed two cars sitting atop a caved-in overpass with rail cars jacknifed and toppled over below.

Union Pacific said its train had been primarily carrying auto parts from Illinois to Texas when it struck the side of another train, and that a Union Pacific engineer and conductor were slightly injured, according to spokeswoman Calli Hite.

The Union Pacific locomotive and about a dozen cars derailed in the crash, she added. She said the derailment was the second involving one of the company’s trains on the same stretch of track in recent months, after a January 29 derailment that was weather-related.

BNSF said that its train, which was 75 cars long, had been hauling scrap metal from salvage facilities and was heading south when it was struck, and that none of the crew was injured.