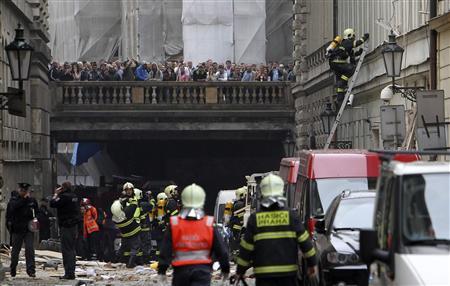 (Reuters) – An explosion in central Prague on Monday, probably caused by gas, injured as many as 40 people, officials said, and neighboring buildings – including the National Theatre – had to be evacuated.

The explosion, in a building facing the Vltava river just a few dozen meters (yards) from the 19th-century theatre, was heard as far away as Prague Castle about a mile away.

A police spokesman said the blast was probably caused by gas and that there had been about 15 people in the building, which included an office of the International Air Transport Association (IATA) and an art gallery.

“We estimate up to 40 people were injured,” Zdenek Schwarz, the chief of Prague paramedics, said on Czech Television.

“These are mostly light injuries, cuts, bruises, injuries from glass. We estimate no more than four seriously injured, but this is preliminary information,” he said.

An emergency services spokeswoman said some people may have been trapped in the building, which belongs to the Czech Air Navigation Services company.

A Reuters witness at the site saw about a dozen people being treated by emergency services.

“I was sitting quietly in my flat, making coffee. Then there was an incredible explosion. I thought the building would collapse. I looked out the window, and there was only dust everywhere,” Venceslava Sehnotkova, a pensioner living in a nearby house, told Reuters television.

The blast blew out some of the windows in neighboring buildings, including Prague’s landmark Cafe Slavia. The building where blast occurred also includes the Prague FAMU film school and the social sciences faculty of the Charles University.

A fire department spokeswoman said there were no reports of fatalities.

Several streets around the site were cordoned off by police.

On Sunday, part of a five-storey residential building collapsed – possibly because of a gas explosion – in the northeastern French city of Reims, killing three people and injuring 14, officials said.